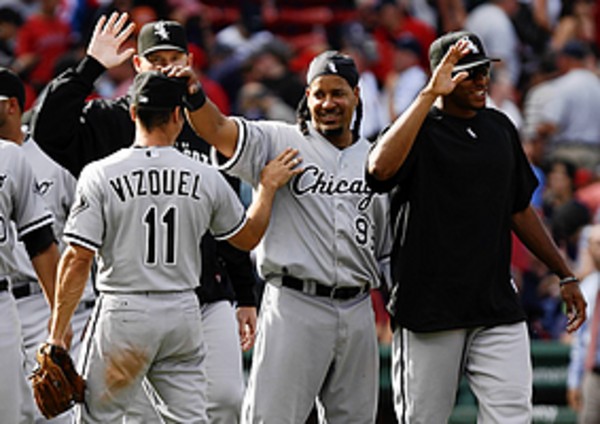 The battle of the Sox was won today by the White over the Red as the Pale Hose swept a day-night doubleheader at Fenway with identical 3-1 scores to move within 3 1/2 games of the Twins. The suddenly “on-fire” South Siders have now won the first five games of their 10-game road trip with the time-honored formula of outstanding pitching and timely hitting.
John Danks outdueled 15-game winner Clay Buchholz, Gordon Beckham delivered a key RBI double in the seventh inning, red-hot Paul Konerko collected three hits and Sergio Santos and Bobby Jenks preserved the win out of the bullpen in Game 1.
Gavin Floyd was the winner and John Lackey the loser in Game 2 with Scott Linebrink and Chris Sale excelling out of the pen before Jenks got the last four outs for his second save of the night. Offensively, Carlos Quentin smashed a double and a triple while scoring a pair of runs and Mark Teahen had a 2 for 4 night. Due to a pair of Bosox errors, which resulted in two unearned runs, backstop Ramon Castro had the only Chisox RBI with a sac fly.
The Manny Watch:  In his return to Boston, Manny Ramirez went 2 for 4 in the first game and 1 for 4 in the second, all singles.