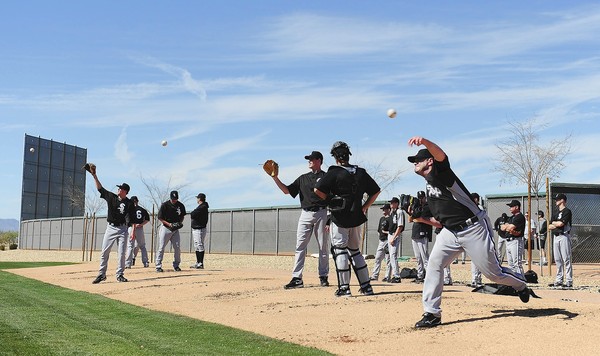 The early days of spring training, the time before the exhibition games begin, don’t bring a whole lot of news, but we all know that’s not the point. The point is that baseball is back.
So, while pitchers and catchers enter their fourth day of getting back to their summertime routines and only a handful of position players have reported for duty, the news is slim aside from the proclamation that Chris Sale will be in the bullpen. The following will have to do for now:
—Adam Dunn reported to camp early and had to explain to his son why his number has changed from his familiar No. 44 to No. 32. The reason? Peavy is 44.
—Mark Buehrle, two-time Gold Glove winner and the author of the best defensive play of 2010 (on Opening Day), flubbed a few grounders in drills yesterday. In typical Mr. Perfect fashion, he laughed it off.
—Jake Peavy‘s first start of the spring is now scheduled for March 4 in Tempe against the Angels. Considering how important he is to the starting rotation, it’s something we should all keep a close eye on.
–The spring games will determine the makeup of the Sox roster and what the complement will be regarding pitchers and position players. At this point it appears everyone is in agreement that 12 pitchers is preferred, but the fact that a fifth starter won’t be needed until April 10, might mean 11 will go North for Opening Day.
–No surprise here: Ozzie told reporters he goes more on instinct than relying on computer printouts. Duh…
–A couple of ex-Sox notes: Joe Crede decided not to report to Rockies camp and instead opted for free agency…Centerfielder-turned-pitcher Brian Anderson is now a candidate for a spot in the Yankee bullpen. He pitched in the Royals’ minor league system in ’10.