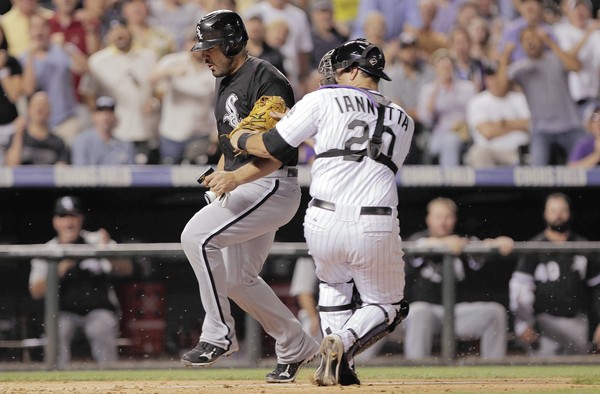 It had all the earmarks of another disappointing loss.

Having blown a two-run lead as a result of a pair of solo homers (by Jason Giambi and Ty Wigginton) off of Mark Buehrle, the Sox found themselves tied 2-2 with the bases loaded and two out in the bottom of the eighth inning Wednesday night. Brian Bruney was on the mound facing Wigginton, who unloaded for the long blast his last time up.

Not exactly the guy you’d choose in an attempt to close the door, Bruney did the job by forcing Wigginton to hit into a double play to end the inning. A huge relief.

That said, it was one thing to close the door because Sox pitching has been their saving grace. It was quite another to think, with all their recent missed opportunities, that they could actually muster a run to take the lead and hand it over to Sergio Santos to clinch the win.

But they did it. Carlos Quentin led off the top of the ninth with a single, coasted to third on a Paul Konerko base hit and scored on an A.J. Pierzynski sac fly that just scored CQ (pictured above). It certainly wasn’t a powerful offensive display and my heart sunk a bit when Alexei Ramirez struck out after the two singles. I had visions of Quentin being stranded at third, like so many White Sox baserunners have so far this season. And as we hoped Santos shut down Colorado 1-2-3 in the ninth for his 16th save and the 3-2 victory.

The  yo-yo season moves on. After Tuesday night’s controversial defeat, we’re on the rebound again, back to three games under .500 and four games in back of the Tigers who got clobbered by the Mets.

Let’s see what happens in tomorrow’s matinee with Jake Peavy on the hill in what is shaping up to be a bit of a bizarre baseball season on the South Side.