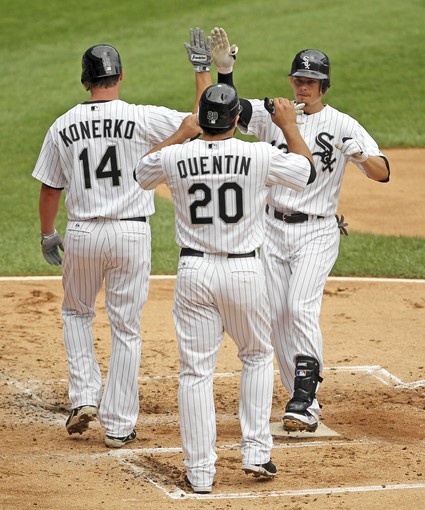 A time-honored adage among baseball aficionados is that every team wins 60 games and loses 60. It’s the other 42, conventional wisdom says, that determine how a club will fare over the 162-game season.

With the 6-2 White Sox win over the Royals this afternoon, the South Siders are exactly 60-60 as they once again become a .500 ballclub. While the adage above doesn’t  apply only to the symmetry of being even with 42 to go, the remaining games will indeed determine the final result of what has been a roller coaster season, to say the least.

The Sox have been here a few times, but getting over .500 is what has been the challenge as they haven’t been at that plateau since April. They’ll give it another try Tuesday night when they face the Indians in what will be a crucial three-game set.

Give It Up For Lilli

Brent Lillibridge is far from a perfect ballplayer, but he’s been a godsend this year for the Sox. He’s in the majors primarily for his defensive excellence and versatility–and as a result of the Paul Konerko injury and Adam Dunn‘s inability to hit the baseball, especially against lefties, he’s added first base to his repertoire of second, short, third and all three outfield positions. To his credit, he’s played first like he’s been doing it for years, making outstanding play after outstanding play. And by the way, his 10 homers are just one shy of Dunn’s 2011 output. Lilli’s 10th, of course, came today in the form of a three-run blast that gave the Sox an early 4-0 lead that they never relinquished. Brent has 146 at bats, Dunn 341.

It’s certainly not breaking news, but Konerko continues to display the kind of attitude and performance that is indicative of the consummate team leader. Saddled with the calf injury that has made it close to impossible for him to run the bases, the Sox All-Star has refused to take a seat on the bench. And as the full-time DH since the injury he hasn’t lost a beat in what has been one of his finest seasons. Today, he was 3 for 3 with two walks and a run scored.

Sox Pick Up a Game

Now at .500, the Sox now trail the Tigers by four games as a result of our win and the Detroit loss to Baltimore.