This is a Hollywood script in the making. Just imagine, Viciedo finally arrives on the South Side, has a monster five weeks and helps the White Sox overcome the seven-game deficit to win the A.L. Central. 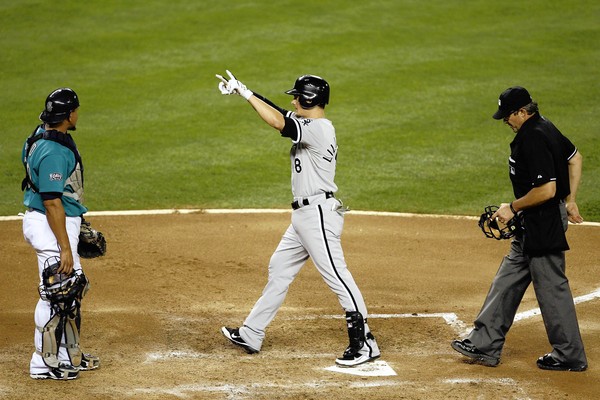 What were the odds…at the beginning of the season that Brent Lillibridge (12) would have more home runs than Adam Dunn (11) at the end of August? And Lilli has done it in about 200 less at bats.  Brent’s 12th, a two-run blast, came last night and proved to be the difference in the 4-2 Sox victory over the Mariners At Safeco Field. A native of the Seattle area, Lilli is shown above, perhaps pointing to this friends and family in the stands. 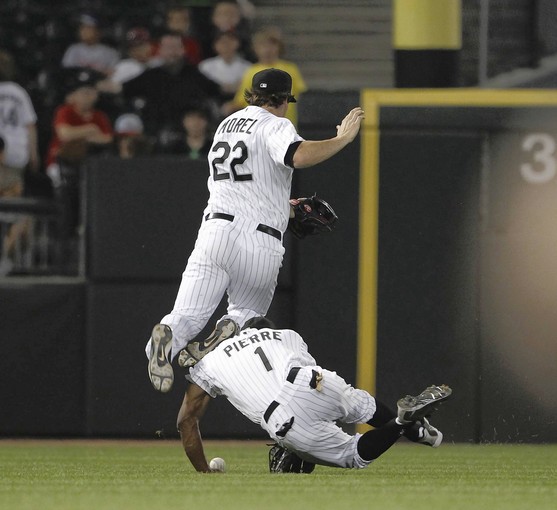 Let’s be honest with ourselves. Winning two of three from the Mariners and in the process defeating their two aces, Michael Pineda and Felix Hernandez, is cause for celebration. But the reality is that the Sox can’t afford to lose a game like they did last night when it’s a tie ballgame going into the ninth with their closer, Sergio Santos, on the hill.

Sure, it’s baseball and you can’t come through every night, but in the case of the Pale Hose there is simply very little margin for error after their horrendous start.

A victory would have enabled the South Siders to gain a game on both the Indians and Tigers, the two teams they are chasing.  As it stands, instead of standing five games behind Cleveland and three and a half in back of Detroit, it’s six and four and a half. Much improved from a few weeks ago, but the opportunity was there to shave the leads and the Sox couldn’t get it done.

It’s not that the Hose didn’t show signs of life. Down 4-2 heading into the bottom of the eighth, the Sox tied the score on Carlos Quentin‘s two-run homer, his second blast of the game and 17th of the season. Unfortunately, the offense stopped there and the Sox lost in 10 innings, 7-4.

Perhaps the most disheartening aspect of the contest was a pattern with which we’re all too familiar. Leading off the top of the 10th, Seattle’s Justin Smoak blooped a double  that fell between Brent Morel and Juan Pierre in left field, which started the three-run rally (pictured above). Presumably Pierre was playing deep in a “no doubles” defense and it really wasn’t Morel’s play, although he made the effort from his position at third base.

Whether it was anyone’s fault or just one of those things, it doesn’t matter. If the Sox are to dig out of their early season hole, that play and others like it somehow have to be made.

After three straight losses to start the exhibition season–two by one run–the White Sox finally got into the victory column today with a convincing 6-1 home win over the Mariners. The triumph was highlighted by a four-run Pale Hose eighth inning, the first Sox homer of the spring and excellent pitching.

The Ups:
Alex Rios (above) gave the Sox the lead in the fourth inning with a two-run blast, the club’s first four-bagger…Tyler Flowers doubled in a pair of runs in the eighth with Eduardo Escobar (a sac fly) and Lastings Milledge (single) adding RBIs as well. Paul Konerko led off the inning with a triple (not a typo)…Adam Dunn (single) got his first hit of 2011 and Dayan Viciedo collected two base hits…John Danks, making his first spring start, Tony Pena (who was credited with the win) and Jeffrey Marquez each pitched two scoreless innings. Will Ohman and Gregory Infante each hurled a scoreless frame. Jeff Gray, who relieved Ohman in the sixth, walked three in his inning of work, but escaped as only one run scored.
The Downs:
It’s nit-picking, but both Beckham and Tyler Saladino were caught stealing by former Sox catcher Miguel Olivo…And, as mentioned above, Gray, who should be given credit for weathering the storm, barely escaped what could have been a disastrous inning.
Sox travel to Tempe tomorrow to face the Halos. All eyes will be on the recovering Jake Peavy, who will be making his first appearance of 2011.

If the White Sox had any chance of beating C.C. Sabathia and the Yankees tonight, John Danks (above) needed to be on his game. Unfortunately for the South Siders he wasn’t, and the Sox found themselves on the losing end of a 12-9 decision. It also dropped them to 4 1/2 games behind the Twins, 1-0 winners over the Mariners this afternoon.
Giving up a trio of two-run home runs in the first three innings, Danks put the Hose in a hole in which they could never escape. Trailing 6-1, the Sox narrowed the margin to a single run on the strength of a Paul Konerko two-run homer in the third inning and a two-run Andruw Jones blast in the fourth, but Danks and Tony Pena opened the flood gates again in the fifth by combining to surrender a fatal four spot. The Yanks, who smashed a total of four homers, padded their lead with two more runs in the final four innings. The Good Guys, resilient to the end, threatened in the ninth and had the tying run at the plate, but it was just too little too late–especially when you’re facing Mariano Rivera.
It’ll be up to Gavin Floyd tomorrow afternoon on Frank Thomas Day to help get the Sox a series win before they head to Cleveland, Boston and Detroit.
Pale Hose Notes of Note: The Sox outhit the Yankees 16-14, but Chicago pitchers walked an unacceptable nine men–which really was responsible for turning the tide…Lucas Harrell, recently recalled from Charlotte, entered the game in the ninth after Carlos Torres loaded the bases with one out. He was impressive, striking out Derek Jeter and getting Nick Swisher to line out to Juan Pierre in left.

It was another White Sox explosion tonight as the South Siders crushed four home runs in a 9-5 victory over the Mariners. It concluded a four-game sweep over Seattle and moved The Good Guys to a game and a half in front of the red-hot Twins.
Ramon Castro connected for a pair of roundtrippers and Paul Konerko and Carlos Quentin hit back-to-back blows in the seventh to cinch the victory.
Freddy Garcia bounced back from his disastrous last start and pitched six solid innings to win his 10th game of the season.
A weekend series with the A’s is up next.
Sox Loyalty
My company is running a sports career event this week in New York, where high school and college students from around the country are touring NY area sports venues like Yankee Stadium, Red Bull Arena, Madison Square Garden and Citi Field and hearing from sports business leaders.
One of the stops we made on Wednesday was the MLB Network where we posed for pictures in one of the dugouts at Studio 42, named after Jackie Robinson.

Credit Gordon Beckham, Alexei Ramirez and Paul Konerko for their clutch home run prowess and Alex Rios‘s clutch single which drove in the winning run in the seventh. But the real heroes in the 6-5 come-from-behind victory over Seattle tonight came out of the bullpen in a game that saw Mark Buehrle struggle in only five innings of work as he missed the opportunity to win No. 10.

A scoreless inning and a third from Sergio Santos…

A scoreless 2/3 of an inning from Matt Thornton, who was credited with the win… 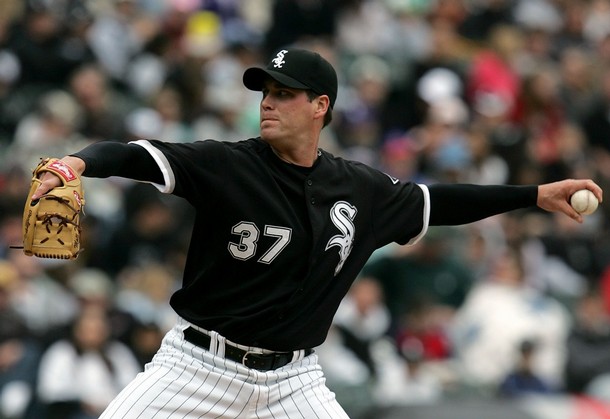 And a scoreless, three strikeout save from Bobby Jenks…
And the Sox remain one game up on the Twins in the A.L. Central pennant race as they won their 10th straight victory at home and made it 17 of 18.

Three homers (Paul Konerko, Alexei Ramirez, Andruw Jones), 12 hits, four doubles (two each by Dayan Viciedo and Gordon Beckham) and a Gavin Floyd gem later, the White Sox walked away with an 11-0 thumping of the Mariners tonight at the Cell.
It was the ninth straight home victory for the South Siders and 16 of the last 17. The win, combined with the Twins’ victory over the Royals, keeps the Sox lead in the A.L. Central at one game.
Floyd continued his sparkling pitching run with seven innings of shutout ball. In his last 10 starts he has compiled an impressive 1.04 ERA and hasn’t given up more than two earned runs in a game in almost two months.
The one thing that stands out to me more than anything else–including what Floyd has
done–is the recent play, both offensively and defensively, of Ramirez. He had a homer, three hits and three RBI tonight and has now brought up his average to .288. And he’s been virtually flawless in the field with his patented flair.
Simply put, Alexei’s performance alone has been worth the price of admission.

Art of the Pale Hose
Create a free website or blog at WordPress.com.